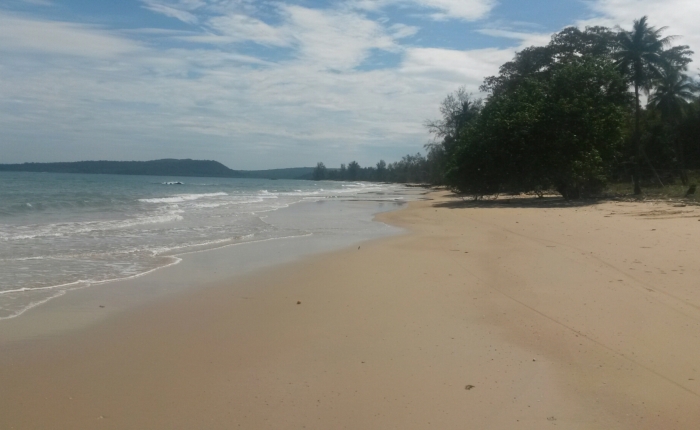 Grey clouds gather above Sihanoukville harbour. We’re told it will be a rocky ride by our captain as we board a wooden boat that has seen better days. As the harbour disappears behind us, beers are passed round and the soundtrack from Titanic blares from the on-board speaker. “It’s the captain’s favourite” one of the crew tells us between bouts of laughter, as we lurch violently from side to side. That was the start of the most hilarious and terrifying boat ride we’ve ever experienced. 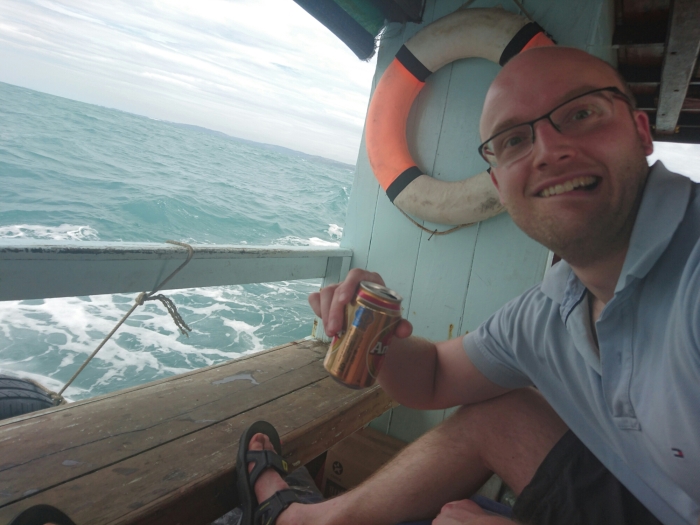 We arrive 2 hours later, jelly legged and ears ringing from The Venga Boys being pumped out at full volume (another of the captain’s faves!) having succeeded in not throwing up or falling overboard. Here was our island paradise, albeit a slightly stormier version.

Turquoise waves crash into a sugary white beach and palm trees loaded with coconuts sway in the breeze. There’s not another soul in sight. Sounds expensive, you’re thinking, a luxury resort maybe. Wrong! This little gem on the North East coast of Cambodia’s Koh Rong Island is one of a number of budget backpacker joints springing up after plans for a big resort development stalled. 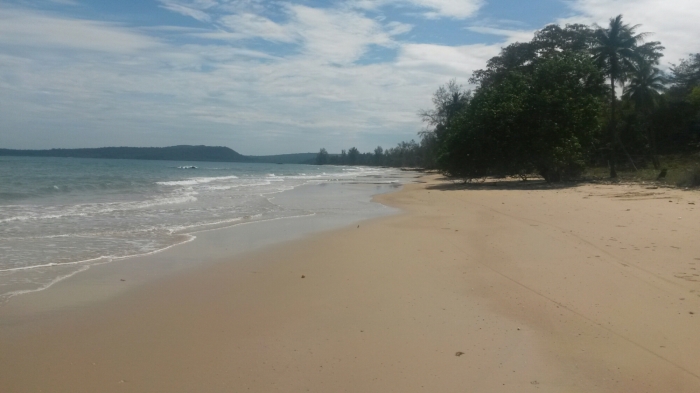 Palm Beach Bungalow Resort also benefits from one of the cleanest stretches of coastline on Koh Rong thanks to a luxury resort located on a smaller island just offshore which has invested in a clean-up operation to lure in high paying guests. The staff also work tirelessly to keep the beach clean. 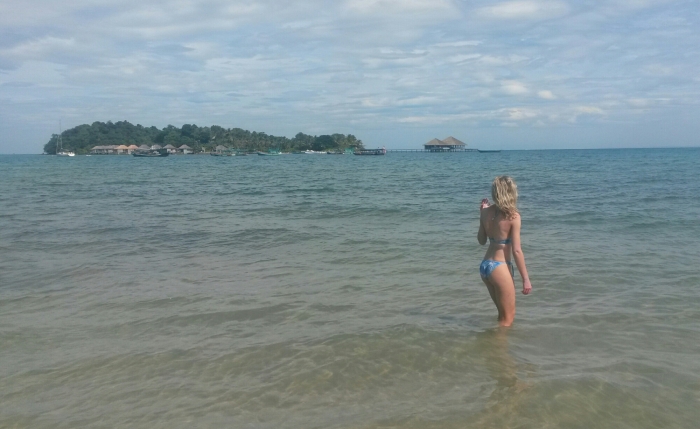 We spent an atmospheric evening watching the waves roll in beneath a tumultuous sky of blues, greys and orange. The colourful lanterns in the beach bar swayed above our heads as the wind picked up with the occasional power cut really adding a shipwrecked on a desert island vibe! While the stormy weather was impressive, we were relieved to wake up the next day to blue skies and sunshine.

The resort houses simple wooden bungalows scattered among palm trees strung with hammocks. The only other building is the charming bar/restaurant which does weekly seafood BBQs. This section of beach belongs to the resort which means it’s never crowded unlike other parts of the island. In fact, most of the time we had the beach to ourselves.

If swinging in a hammock isn’t enough to occupy you, a guy named Giggles runs snorkelling trips or you can hire beach bicycles specially fitted with fat tyres and ride around the island. There’s also the fishing village of Prek Svay nearby where local fishermen have worked for generations offering a glimpse of true Cambodian life. We were happy just enjoying the island’s beauty, so didn’t opt in for any of the trips. Plus we’d stretched our budget to be there and our visit was more about getting some R&R on the beach so I could recover from an allergic reaction to some mosquito bites.

It costs £32 per night for 2 people to stay in a basic double beach bungalow. More than we’d budgeted for but when you consider that £32 buys you pretty much your own personal slice of paradise we thought it was pretty damn good. It costs £20 each for the return boat trip from Sihanoukville. Palm Beach is the only resort on this part of the island so you have to get the island’s own ferry service which departs from a different port to the main speed ferry. Tickets can be purchased from the Terrace Hotel in Sihanoukville.

So if like us you’re a beach bum on a budget who’s a sucker for a white sandy beach and crystal clear waters then this is the place for you! But you’ll need to plan a visit soon if you want to take advantage of the low prices before the big developers move in. Koh Rong is being pegged as the next Ko Samui so its only a matter of time before the hoards descend on this relatively unknown island paradise. Catch it while you can.

3 thoughts on “Island paradise on a budget”