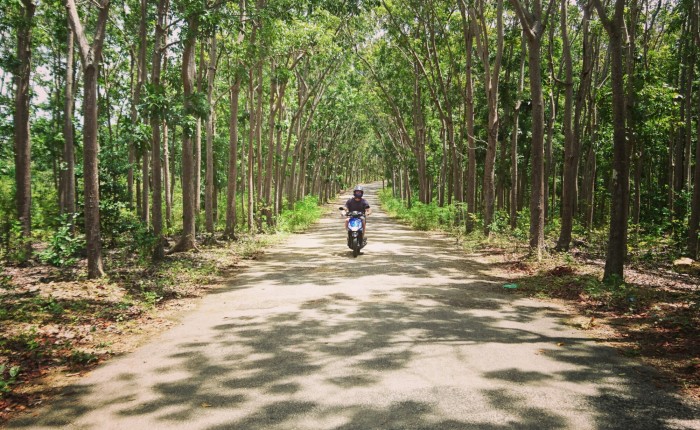 My teeth chatter as we lurch over another pothole and my ill-fitting helmet slips down over my eyes for the 14th time, but I don’t care because we’re riding through the most spectacular tree lined avenue, the sun flashing through the leaf canopy like strobe lights. When we top the crest of the hill the sea stretches out twinkling before us, framing a perfect crescent of white sand. We oooh and aaah as we have done on every hilltop and around every corner so far that day.

If ever an island was designed for road-tripping its pretty little Siquijor. Its 72km coastal road winds past picturesque churches, enchanted trees and cascading waterfalls with Tarzan swings. In a day you can buy a love potion, have your feet nibbled in a natural fish spa and walk along some of the most beautiful beaches in the world.

Known as the spooky island on account of the witches and healers living in the mountains, Siquijor possesses an earthy charm that sets it apart from the other islands. Its beaches are less polished than those on Boracay, it’s forested interior wilder than Palawan, and there are far fewer tourists. It was one of the most interesting islands we visited in the Philippines. Whether sorcery or not, we were definitely bewitched by beautiful Siquijor.

Hiring a motorbike is the best way to see the island and costs just £14 for the day. Here are some of the sights you can encounter in a day two-wheeling around Siquijor.

Go to church in Maria

We were staying on the north eastern side of the island so our first stop was Maria, a quaint little village which is home to the ‘Our Lady of Divine Providence Church’ and a lively market. Buy an apple and wander around the peaceful grounds, admire the rustic church bell and observe village life in action. On your way out be sure to hi-five the local children who run out to greet you as you pass by.

Snorkel on the east coast beaches

Siquijor has no shortage of stunning beaches but we found those on the south eastern side of the island between Maria and Lazi particularly beautiful. These beaches sit on a marine reserve so not only will you have the place to yourself but you’ll also be tripping over starfish as you wade into the crystal clear ocean. Just take any of the tracks leading down to the coast between Maria and Lazi and you’re sure to find a patch of pearly white sand.

Once you’ve snorkelled with the fishies along the east coast beaches follow the coastal road to Lazi, which is the next town along from Maria. Make a quick stop to admire the church, one of the oldest on the island, then take a right turn in the centre of town towards Cambugahay Waterfall. The falls are free but you’ll need to pay a few peso to park the bike.

Nothing can prepare you for that first moment you see the waterfall, the vivid aquamarine suddenly appearing, glowing like a jewel from where it nestles in the trees as you descend the stone steps. Once you’ve pinched yourself, continue up along the path to the second pool where you can swim beneath the cascading water. You’ll feel as though you’re in a Disney film as you swing from the Tarzan rope and drop into the cool depths to the sound of chirping birds in the heart of the jungle. Find other waterfalls on Siquijor.

If you can drag yourself away from the falls, return to the coastal road and continue along to the 300 year old Enchanted Balete Tree. Local people believe that spirits live here and you can dangle your feet in the healing waters beneath the canopy of twisted branches and let the fish nibble your toes while you sip on a Buko juice. It’s surprisingly relaxing once you get used to the tickling sensation! Just be aware this is no boutique fish spa and there are some pretty huge beasts in there! So don’t freak out when you see Jaws gliding towards you, his nibble is more gentle than it looks!

On the opposite side of the island is San Juan, which is slightly busier than the eastern coast. The main drag consists of a string of beach bars, cafes and backpacker hostels which sit along pretty, palm tree lined Paliton beach. Have lunch and soak up the rays before continuing north. Just don’t forget to fill up your petrol tank here as there aren’t too many filling stations around!

This is also the place for good value beachfront accommodation, so if you’re not quite ready to leave San Juan’s pretty beaches just yet, you don’t have to! Find places to stay around San Juan.

Between the towns of Siquijor and Larena sits Guiwanon Spring Park, a lush mangrove forest which can be explored via an elevated rickety wooden pathway. Walk the plank to the end and you’ll be rewarded with an ocean view. See more reviews of the park here

Our last stop was remote Sandugan beach on the north western tip of the island beyond Larena. The empty beaches here have a rugged end of the earth feeling. Dip your toes in the ocean or don your snorkelling gear and head out a few metres to explore the coral reef. Fill your lungs with sea air and let the waves lap your feet before riding home.

To find out about the best beaches elsewhere in the Philippines, check out our recent blog post – Philippines: In search of the perfect beach