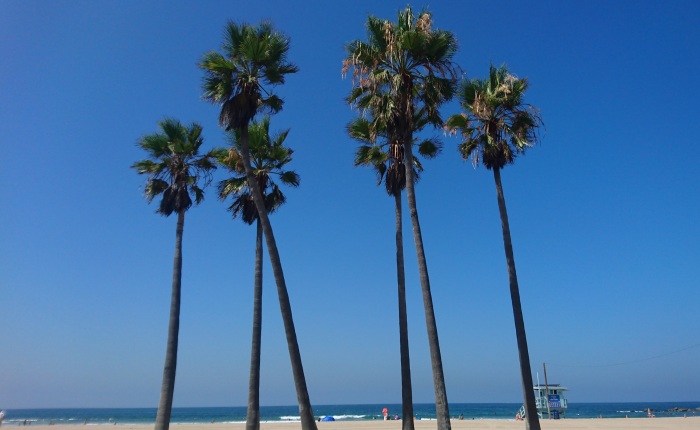 We’ve been on the beach for less than an hour and we’ve already seen a dog wearing sunglasses, a souped-up bicycle with built in boombox and more slick, tanned muscles than an episode of Baywatch. But this is not your typical California beach. This is Venice Beach. Big, brash and unashamedly wacky. The sand may be just as golden, but there’s a tantalising unpredictability hanging in the air beneath the swaying palms that sets this place apart from anywhere else on the planet. Anything could happen.

Venice Beach is just one of many incredible places to visit on a holiday to Los Angeles. The city often gets criticised, with words like tacky, smog-filled and botox-obsessed used to describe it. I don’t mind admitting LA was never on our ‘hit list’, it just happened to be our gateway out of the USA. However I’m happy to report that Los Angeles was one of the best surprises of our 8 month round the world trip.

What the critics fail to mention are the miles of spectacular coastline, harbouring one beautiful beach after another which border this fascinating city. Or the gorgeous white-washed homes swathed in pink flowers that speckle the hillside inland. You can eat anything you like here. A plethora of top class restaurants and glittering shop fronts line the streets and as you stroll between beautiful bars, you’ll catch a glimpse of the iconic Hollywood sign nestled in the hillside. And then there’s the irresistible lure of Hollywood which emanates from every pavement and billboard. Scenes from our best loved films and shows leap out at you around every corner. There’s a sense of history here which the locals are fiercely proud of.

I could go on… It’s safe to say, Los Angeles caught us by surprise and should definitely not be overlooked. Whether you’re just passing through en route to somewhere else or visiting for a couple of weeks the city has plenty to offer travellers. Here are ten incredible things to do on a holiday to Los Angeles.

Drive the Pacific Coast Highway in a Mustang

Los Angeles is known as the city of dreams and what’s dreamier than cruising along one of the most beautiful stretches of coastline in the world in a classic Ford Mustang convertible? Once you’ve collected your wheels head north along Route 101, better known as the Pacific Coast Highway. You’ll pass through picturesque Santa Monica and Malibu, winding your way around craggy inlets revealing perfect crescents of white sand lapped by the Pacific Ocean. Continue onto Santa Barbara (2 hours north of LA) and arrive just in time to watch the sunset over the picturesque pier. A full day care hire cost us £60.

Do a film studio tour

Immerse yourself in the magical world of motion pictures with a film studio tour. As avid ‘Friends’ fans we opted for Warner Brothers who are also responsible for Harry Potter, Batman, Wonder Woman and a host of other blockbusters. Could we BE any more excited!! (Sorry) It’s all aboard the golf buggy (what else?) to drive between studios. You can sit on the famous sofa in Central Perk, wear the Harry Potter ‘sorting hat’ and have some fun with a green screen. There are props aplenty and if you’re lucky you might even spot a celebrity. Sadly we were out of luck on the A-list front but we did meet the guy responsible for the slime in Ghostbusters and operating the raptors in Jurassic Park!! The tour lasts 3 hours and costs £45.

People watching is no casual pass time here. It’s a full time job! This is the place where the city’s weird and wonderful congregate amid graffitied palm trees and skate parks. Venice Beach also has cheaper accommodation options than nearby Santa Monica. We found a lovely condo for 6 people close to the beach for £43 per night each which ain’t too bad for pricey California.

Californians embrace an outdoor lifestyle and with an average 284 days of sunshine every year and some of the most beautiful beaches in the world, it’s no wonder. Malibu is the queen bee when it comes to beaches with some absolute gems adorning its coastline. All are toe-sinkingly soft and spotlessly clean. Your only challenge will be deciding which to spend the afternoon upon.

For the best view of Los Angeles head to Griffith Observatory. Perched on the edge of Mt Hollywood, the building’s iconic triple domes create a striking picture against the hazy backdrop of the sprawling city. It’s also a great spot for unobstructed views of LA’s famous landmark sign. Inside the Observatory is a centre for cosmic discovery with a raft of space and science related displays. Its costs £5 to go inside, but the views are free!

The Hollyood Walk of Fame

Yes it’s cheesy and touristy and you may get your eye taken out by an overly enthusiastic side-kicking Spiderman but it’s an integral and unmissable part of a holiday to Los Angeles. More than 2,600 celebrities have been honoured with their own brass star in the Hollywood sidewalk. Even more fun than tracking down your favourite film and music icons is watching other people pose for hilarious selfies. For a great lunch spot nearby try Javista.

Have drinks on the coolest street in America

Just minutes from Venice Beach is Abbot Kinney Blvd, branded the coolest street in America by Forbes magazine. With a mile of top eateries, trendy bars and hip clothing and design stores you can cool off from the LA heat and brush shoulders with the rich and famous. Have a glass of wine in ‘The Otheroom’, a minimalist bar with high ceilings followed by dinner at seafood bistro ‘Salt Air’.

Beautiful Santa Monica, located on the coast between Venice Beach and Malibu, has it all. With a picturesque pier, spectacular beach and a huge array of desirable bars and restaurants, this is the place to spend an evening. As the sun sinks towards the horizon check out famous Muscle Beach beside the pier where petite gymnasts impress with acrobatics and beefy guys with thick necks pump iron.

Glitzy Rodeo Drive quite literally sparkles as the LA sunshine bounces off shiny gold and black fronted designer shops like strobe-lights. No wonder everyone is wearing designer sunglasses! Even the palm trees lining this decadent street look expensive – or perhaps that’s down to the Lamborghini’s parked beneath them. After some Julia Roberts style window shopping, take a drive through some of the Beverley Hills neighborhoods and gawp at the huge gated properties to see how the other half live.

Complete your holiday to Los Angeles with a cruise down the sunset strip, home to most of the city’s advertising budget. Huge billboards line the highway, towering between palm trees and flashing neon signs. This is classic LA depicted in hundreds of films. So lay back, close your eyes (passengers only), feel the sun on your face and imagine yourself as your favourite Hollywood icon!

All in all, Los Angeles was one of the biggest surprises of our trip. We loved the combination of beach and city life and were impressed by the wide variety of incredible things to see and do. The city has a magical quality that made a lasting impression on us and I look forward to going back some day.

You can find more things to do in LA here or if you’re planning a trip elsewhere in California, check out www.visitcalifornia.com

Have you been to Los Angeles? We’d love to hear about your experience. Feel free to drop us an email or leave a comment below.

4 thoughts on “California dreaming: ten incredible things to do on a holiday to Los Angeles”